The Make A Change Conference!

January 17, 2019
This Thursday we went to the make a change conference in Hamilton, ON!

We had a lot of fun but also learned many things. The first person we saw and the thing we did was we listened to the indigenous elder! He started off talking in his own indigenous language, I thought this was very important because he is setting his own home and culture first, and valuing and respecting everyone by speaking in English after. This showed his connection to his home and how important this was to him. This relates to our class work because of our study on how important home is.

I feel like it was very important to showcase our work, especially since the indigenous elder came over to see it! The work we did showed was really thought out, and I feel that the work was very reflective of how much effort we put in. I know that the elder was very appreciative of how much we did because he looked very happy to see our work and the time and effort we put into it.

I really enjoyed DJ Juan because he made some really good points that led me to think about myself! I really thought he was talking to every individual, and everyone could apply it to themselves. I really loved when he was talking about how sometimes one persons choice can change the whole world. I really thought deeply about this and saw something that wasn’t there before. I saw that I myself could do this, I decided that I wanted to be different and change the world by doing one act of random kindness at a time. I also loved when he was telling the story about the snake he encountered time and time again. This story was told to remind you to face the problems that you encounter because you can’t run from the world, you can’t close your eyes and disappear. He told us to stand strong and confront them, this really tied into his other point which was about true leadership. What is a leader? What is it actually? He said the truth to being a real leader isn’t to wear coloured clothes on spirit day, or to be the first to answer a question. But it is to be strong when others can’t, to show everyone else that you can stand up to the things that scare you the most, without reward, without praise, others will follow along, and that’s what a true leader is.

As for new learning I felt as if everything I wrote here was the start of what I saw, I saw people standing for love, I saw that people made a difference by collect milk bags one by one just to make as much of a difference as they can, I saw student and teachers, all alike, fighting for the same cause.
Change.
I’m really happy I got to go to the Make A Change Conference! I learned and saw so much! Thank you!

Popular posts from this blog 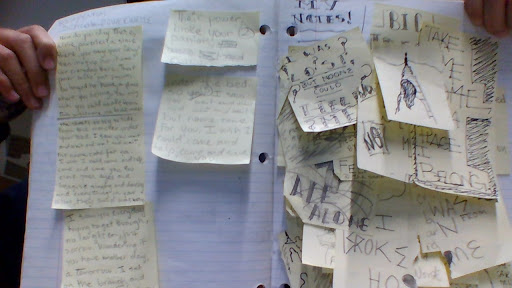 This was the long and thought out process of creating my Residential school art piece! First, you have to brainstorm! Write out all of your thoughts and what you think you should base your idea around. I made my brainstorm based around the way I think. I thought that my ideas could be better displayed and interpreted. This could hold all my thoughts together, without having to write paragraphs. Which led me into more critical thinking, I started thinking how this could benefit me. Then it was time to write the script! I thought long and hard about what message I was trying to portray. When I was done, I started to work on my actual piece! I wanted dark colours because I wanted to portray different sides to the dark. so I kept 2 sides with layers of emotion with the sticky notes. The other 2 sides would be the overall layout of the school! I also wanted to fill the inside with all the bad things about the schools like coal, and all things bad. This would be a kind of interactive experi…
Read more